(a) This is a Fisher’s Solution to a two-period analysis. The following diagram shows how an individual decides from the opportunities that are currently available to him. 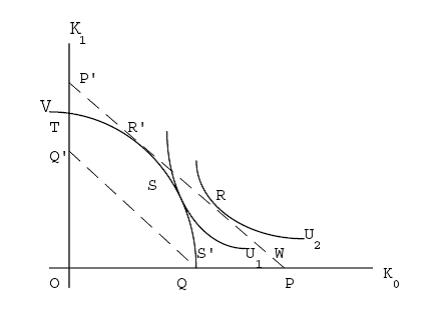 Now, the starting point could be any point within the first quadrant or at the vertical or horizontal axis, T or P. The preference function, denoted by U1 and U2 correlates the two periods.

In regards to the productivity opportunity curve, the curve QSTV reveals a kind of diminishing return to investment. This productive investments are express by (âˆ†k1)/(-âˆ†k0)-1, which is then called the productive rate of return. This curve can be represented as a sequence of investments or projects. The lower right portion of this curve yields the highest productivity return. The target of an investor is to climb to high indifference curve as possible, which U1 and S as the highest attainable point. To achieve a much better results, the investor would reach up point R’ on the market line PP’. For this to be possible, the investor would now move in reverse order along the market line PP’, which is then called borrowing, and thus achieve the best available at point R. 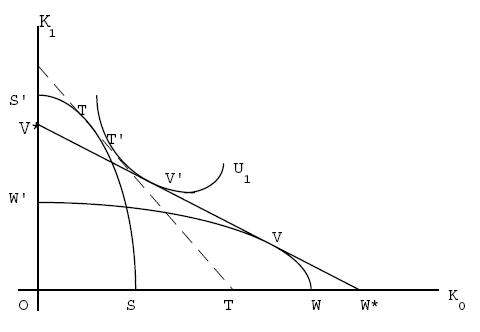 In this diagram, its shows that there are two market lines, one line (dashed) represents the borrowing opportunities of an investor, and the other one (solid) represents the lending opportunities. Likewise, there are also two curves that show two productive opportunities that lead to U1, a solution for the best investment projects. The curve STS’ is a target productive opportunity for an investor which would also lead to an optimum T’, which is done by moving T and then borrowing. 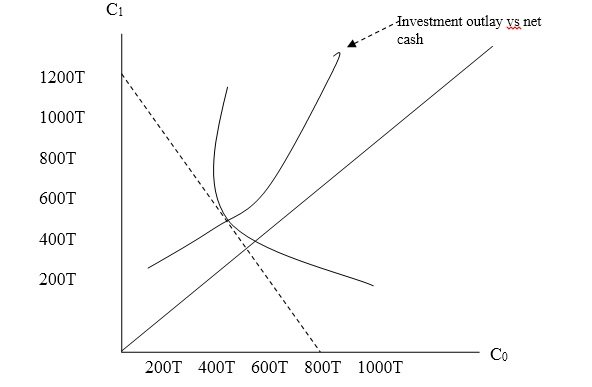 Since the investor has an income of â‚¤2m and has no future income, we have to let C1 be equal to zero and look for the value of C0:

which is the productive rate of return? The present value rule and internal rate of return will give the same answer on a two period case.

One characteristic of IRR that makes it a valuable concept in investment planning is that it helps to measure on how worthy an investment is even with different initial outlays.

(a) Again, consider the diagram below: 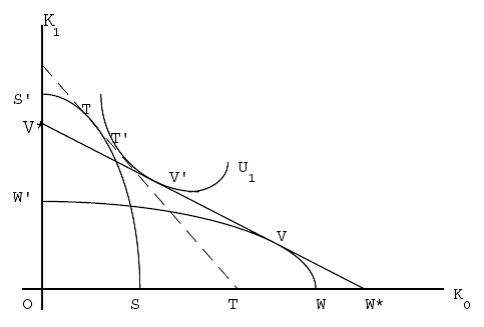 Now, in the presence of perfect capital market, each investor with corresponding projects would target on reaching the optimal level of productivity. Thus exists every production opportunities for each set, which on this point, every opportunities are not necessarily the same. Supposed there is an opportunity on point V, the market line would then be VV’, and any starting point that lies within this line will have the same market line as V. On the hand, a starting point at W will also yield a market line of WW’, as well as any other starting point that lies within this line. These may represent the different individual choices or investments. Now, from the intersection of this two market lines exists a possible optimal level of productivity that lies also within the curve where U1 resides. With a manipulation between borrowing and lending, then we are actually moving to the curve from T’ and V’, and thus may achieve the possible optimal level of productive investment which is the U1. This will now lead an intersection where each shareholder agrees on the optimal solution. 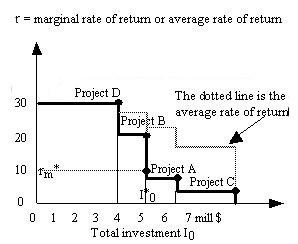 (c) Now, in terms of relating Fisher’s Separation Theorem and the Net Present Value criterion, both criterion, as its purposes are made, solves and seek to provide investors a good basis on selecting a satisfying plans or investment. However, NPV is much useful in cases wherein projects under consideration are of the same cost, which in contrast with Fisher’s theorem that it may take into consideration projects with different investment costs.

Also, NPV can put into comparisons for certain plan at different interest rates for consideration. This will most likely provide on-process deliberation of an investor planning to invest to a certain project, by which Fisher’s theorem may not able to do so.

(d) Based on the survey conducted by Arnold and Hatzopoulos in 1999 (Lime Consultancy) regarding the investment appraisal techniques those were commonly used by UK firms, about 96 percent used the DCF technique. Meanwhile, NPV are frequently used by larger firms than the IRR methods, and 70 percent comprising of respondents used payback method. Based from the survey, the total percentage may sum up more than a hundred, mainly because of overlapping preferences that are being put into practice by this firms. A single firm may well used two methods for their own firm, whatever are suited to their needs.

Preferences on these methods are well-devoted to the different advantages and drawbacks of each methodology. For example, larger companies prefer the NPV since it is much widely known as the “correct” method for determining the possible optimal level of productive investment. Some, however, are obviously considering their own suitable method for their company.

As a comment to these preferences of investment appraisal techniques inside UK, it is well noted that it is due mainly to the need of the firm, especially in terms of modernization. People are actually into a larger demand for modern equipments and thus firms are moving toward the demand of the consumer. Because of this, techniques are then shifted in order to identify which plan would yield a larger profit based on their investment.